skip to main | skip to sidebar

People with a warlike spirit, wearing exalted plumes, like the cocks comb, on their turbans.
Firdausi in Shahnama

The present day insurgency in Balochistan is a continuum of the intermittent guerrilla struggle against the Pakistani state that has characterized Balochistan since 1948. The insurgency in 2004-05 is only different from the ones in 1948-52, 1958-60, 1962-69 and 1973-77 in the scale of the violence and the geographical spread of the insurgency. The causes, the issues, the demands and the goal continue to be the same.

On August 15, 1947, a day after Pakistan came into existence, the Khan of Kalat had declared independence. Kalats independent status had been affirmed several times by the Muslim League and by the Kalat National Assembly. Despite this, on 1 April 1948, the Pakistan Army marched into Kalat and arrested the Khan who capitulated. His brother, Prince Abdul Karim (with the Khans tacit approval) however, declared a revolt proclaiming the independence of Kalat and issued a manifesto in the name of the Baloch National Liberation Committee rejecting the accession agreement signed by the Khan. Karim hoped to obtain Afghan support since Afghanistan had objected to the inclusion of the Baloch and Pashtun areas in Pakistan and had even opposed the admission of Pakistan to the United Nations. While the Pakistani version is that Karim received substantial Afghan support, the Baloch nationalist version is that Afghanistan denied support since it favoured the inclusion of Balochistan in Afghanistan rather than an independent Balochistan. 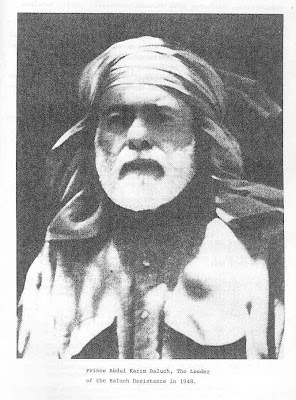 Prince Abdul Karim launched guerrilla operations against the Pakistan Army in Jhalawan district in late May, 1950, but the Khan, threatened with reprisals by Pakistani Army authorities, persuaded his brother to surrender with assurances of safe conduct and amnesty from the Pakistan Army. Pakistani officers reportedly signed a safe conduct agreement with Abdul Karims representatives and swore an oath on the Koran to uphold it. However, Pakistani forces dishonoured the agreements by ambushing and arresting the Prince and 102 of his accomplices on their way to Kalat in 1950. Karims revolt is important in Baloch history for two reasons. First, it established that the Baloch did not accept the accession of Kalat with Pakistan. Second, it led to the wide-spread Baloch belief that Pakistan had betrayed the safe conduct agreement. The Baloch regard this as a first series of broken treaties that have created distrust between them and Islamabad. Karim and his followers were all sentenced to long prison terms and became rallying symbols for the Baloch liberation movement.

The next violent outbreak of Baloch sentiments came in 1958. This was the direct result of the centralising policies pursued by the Pakistani leaders. Fears of Bengali domination in the 1950s had propelled the Punjabi leaders, who controlled the levers of power, to consolidate the Western Wing of Pakistan into a unified province to counter Bengali numerical strength. This One Unit plan was resisted by the Baloch, both by Abdul Karim who had completed his prison term in 1955 and the Khan who mobilised wide spread demonstrations through tribal chieftains. Balochi nationalists within the Khanate took serious exception to the One Unit scheme and in a meeting with Pakistani president Iskander Mirza in October 1957 they urged Iskander Mirza to exempt Kalat from the One Unit scheme, and to allot more government spending on developmental activities in Kalat. But Ayub Khans ambitions changed the political matrix in Pakistan and when some Baloch sardars started non-cooperating with the Pakistani commissioner, under a flimsy pretext that the Khan had raised a parallel army to attack Pakistani military, Ayub ordered Pakistani army to march into Kalat on 6 October 1958, a day before he imposed martial rule in Pakistan. The army arrested the Khan and his followers and accused them of secretly negotiating with Afghanistan for a full-scale Baloch rebellion. 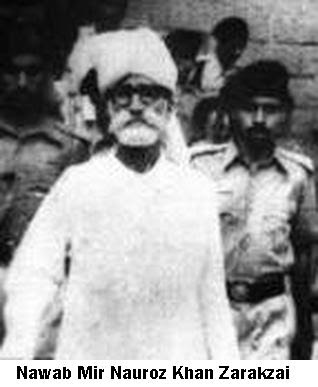 The arrest touched off a chain reaction of violence and counter-violence with the government bombing villages suspected of harbouring guerrillas. Pakistan military's campaigns in Danshera and Wad were resisted by the Jhalawan Sardars loyal to the Khan. The octogenarian Chief of the Zehri tribe in Jhalawan, Nauroz Khan put up a stiff resistance in the Mir Ghat mountains, but the Pakistani military swore an oath by the Quran and urged Nauroz to give up arms and prepare for negotiations. 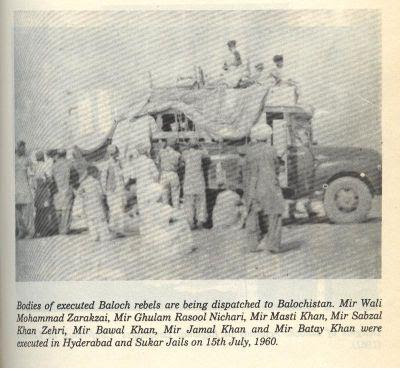 Nauroz surrendered in anticipation of safe conduct and amnesty but the army put Nauroz and his sons behind the bars as soon as they laid down their arms. Naurozs sons were hanged soon afterwards, in Hyderabad and Sukur, in July 1960. A shocked and surprised Nauroz died soon afterwards in Kohlu prison in 1962. Ayubs message to the Balochis of Kalat who were the first to challenge the might of the Pakistani state, was clear. He reportedly threatened the total extinction of Balochis if they did not mend their ways.

The 1958 revolt was followed by the Pakistan Army setting up new garrisons at key points in the interior of Balochistan. This in turn provoked the Baloch to plan for more armed guerrilla movements capable of defending Balochi interests. The movement was led by Sher Mohammed Marri who was far-sighted enough to realise that the 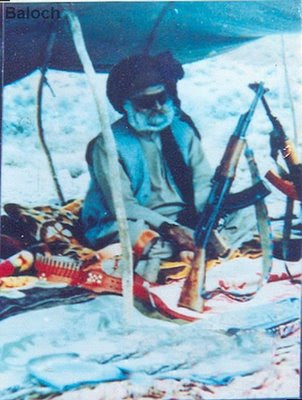 disorganised random struggle adopted so far would have to be transformed into a classic guerrilla warfare. For this purpose, he set up a network of base camps spread from the Mengal tribal areas of Jhalawan in the South to the Marri and Bugti areas in the North. The Pararis, as the guerrillas were called, ambushed convoys, bombed trains and so on. In retaliation, the army staged savage reprisals. For example, the Army bulldozed 13,000 acres of almond tress owned by Sher Mohammed and his relatives in the Marri area. The fighting continued sporadically until 1969 when the Yahya Khan withdrew the One Unit plan and got the Baloch to agree to a ceasefire. Despite the ceasefire, the Pararis assumed that the renewal of the hostilities with Islamabad would be unavoidable sooner or later. As such, the organisational infrastructure was kept intact and cadres continued to be trained. 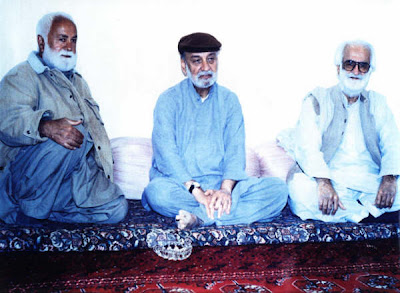 The nationalist Balochis took to rudimentary politics during Ayubs practice of Basic Democracy in Pakistan. They struck a chord of unity with the Pakhtuns in NWFP and formed a National Awami Party (NAP) upon the dissolution of the One Unit scheme in 1970. In the elections of 1971, while Bhuttos PPP swept the polls in West Pakistan, the NAP won in Balochistan and NWFP. The attacks on Punjabi settlers in Quetta and Mastung in early 1973, the perceived defiance of the Ataullah Mengal-led government in Balochistan and the discovery of a large consignment of weapons in the Iraqi embassy were woven together to be served as conclusive evidence of the Balochis militant intentions and General Tikka Khan was sent to Balochistan to lead the second military attack on Baloch nationalists. Pakistan, smarting under the shock of vivisection in 1971, certainly over-reacted to the Balochi nationalist assertion. The immediate provocation for t 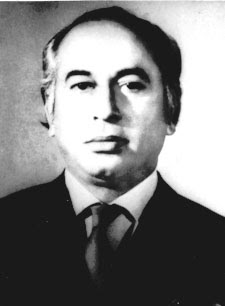 he Baloch resistance was Bhuttos dismissal of the Baloch provincial government in February 1973 in which Ghaus Bux Bizenjo was Governor and Attaullah Mengal Chief Minister. Bhutto alleged that the government had repeatedly exceeded its constitutional authority and alleged that this had been done in collusion with Iraq and the Soviet Union as part of a plot to dismember both Pakistan and Iran. The dismissal was timed with the disclosure of a cache of 300 Soviet sub-machine guns and 48,000 rounds of ammunition allegedly consigned to Baloch leaders that were found in the house of the Iraqi Defence Attaché in Islamabad. It was, however, subsequently revealed that the arms had actually been found in Karachi and were meant for Iranian Baloch in retaliation against Irans support to Iraqi Kurds and that the Iraqi Defence Attaché had collaborated with Iranian and Pakistani intelligence agents in staging the arms exposure to put pressure on the Iranians.

Following the dismissal of their government, Baloch guerrillas began to ambush army convoys from April 1973. Bhutto retaliated by sending in the army to Balochistan and by putting three veteran nationalist leaders of Balochistan Ghous Bux Bizenjo, Ataullah Khan Mengal and Khair Bux Marri, behind the bars. The armed struggle continued over the next four years with varying degrees of severity. At the height of the war there were over 80,000 Pakistani troops in the province. The fighting was more wide-spread than it had been in 1950s and 1960s. The guerrillas succeeded by July 1974 to cut off most of the main roads linking Balochistan with surrounding provinces and to periodically disrupt the Sibi-Harnai rail link thereby blocking coal shipments from the Baloch areas to the Punjab. Additionally, attacks on drilling and survey operations stymied oil exploration activities. 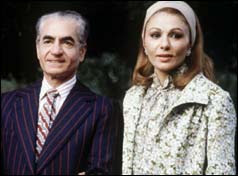 The then Shah of Iran, apprehending trouble in Iranian Balochistan, supported the Pakistan forces in decimating the Baloch resistance. The Shah sent in 30 US Cobra Helicopters manned by Iranian pilots who pounded the Baloch pockets of resistance. The turning point came during the 6-day battle at Chamalang in the Marri area in September 1974. In line with the Pakistan armys scorched earth policy, an 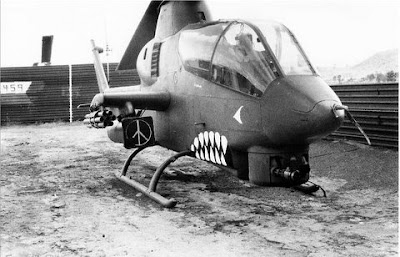 army ground and air offensive in the winter of 1974 on the Baloch tribes, largely Marris, along with their families, who had gathered in an annual pilgrimage to the Chamalang plains to graze their flocks, inflicted heavy human and livestock casualties. While casualties on both sides were heavy, the Baloch were unable to regain the military initiative in the ensuing years.

Most of the Balochi leaders left Pakistan and went into exile in Afghanistan, the UK and other places outside Pakistan. Several Baloch groups migrated to Afghanistan where they were permitted to set up camps by Mohd Daud. Even if Bhutto claimed to have wiped out Baloch resistance, he played a big role in the transformation of dispersed Pararis into the Balochistan Peoples Liberation Front (BPLF) in 1976, led by Mir Hazar Khan Marri, who broke away from Baloch Students Organisation (BSO) led by Sher Muhammad Marri.

The anti-Bhutto sentiments of the Baloch nationalists were well manipulated by Zia ul Haq after he seized power in 1977 and his show of clemency was received well by many Baloch leaders including the Baloch triumvirate: Ghaus Bux Bizenzo, Ataullah Mengal and Akbar Khan Bugti. However, a rebel faction of the Marris continued defying the Pakistani administration. And, as a proof of the irreconcilability of Balochi nationalism with the Pakistani state-nationalism, the most aggressive and fiercely independent of all Baloch factions, the Baloch Students Union (BSO), reorganised and reasserted itself in the early 1990s.

Selig S. Harrison in his book cited below analyses the insurgencies between 197 and 1977 ina splendid manner. His book is:

I think we baluchis slaves of tribal sardars like maingals, marris,and bugtis, more than slaves of paksitani establishment. these tribal sardar has their own jails. they they treat with their own community as subordinats. i hate feudal system. shabbir jamali

We need our land back .